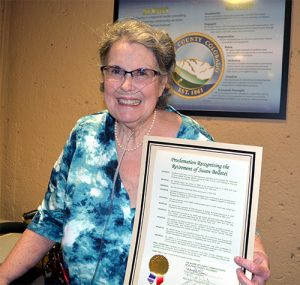 Before hearing emotional words from several of her managers and colleagues, Susan Bellotti said, “It’s been an honor and a privilege to work for El Paso County. When DHS hired me in November of 1993, it was truly an answer to prayer and I’ve been thankful for my job ever since. I’m thankful to God for my life, for my family, and for my career.”

The Board of El Paso County Commissioners at its regular meeting Thursday, June 21, recognized the retirement of Susan Bellotti with an official Proclamation, expressing thanks for her more than 24 years in the County’s Financial Services Department.

County Commissioner Longinos Gonzalez read the retirement Proclamation into record, outlining Bellotti’s many roles during her tenure that began in 1993 as an Account Clerk for the Department of Human Services. During her time with El Paso County, Susan was quickly promoted to Business Office Supervisor in 1993 and to DHS Manager of Budget & Fiscal Operations in 2005. She earned multiple honors, including DHS Employee of the Quarter in 2008. And Susan furthered her education during the last 24 years, achieving a Bachelor of Science in Accounting (1999) and a Master’s Degree in Non-Profit Management (2002).

“I brought my Kleenex,” said Elaine Johnsen, who began working with Susan in 2003. “She was my right arm. She helped me learn so much about DHS. I learned very early on that Susan is honest, ethical, caring and compassionate. She was a wonderful supervisor and a wonderful communicator.”

County Controller Nikki Simmons thanked Bellotti for all she has done, saying, “I have had the pleasure of working with Susan for the last five years. She is the epitome of what you look for in a public servant. She is one of the most conscientious employees that I have ever worked with. Susan, you have helped me understand my job so much better and have been a wealth of knowledge for DHS and Public Health. We are really going to miss you. We have some big shoes to fill.”

Debbie Perry, Bellotti’s current supervisor, approached the dais Thursday but had to cut her words short, displaying the emotion that left many people in the Commissioners Hearing Room also very choked up. “I’m very sad to see Susan go. It’s been an honor. I have a speech written, but I’m not going to make it.” 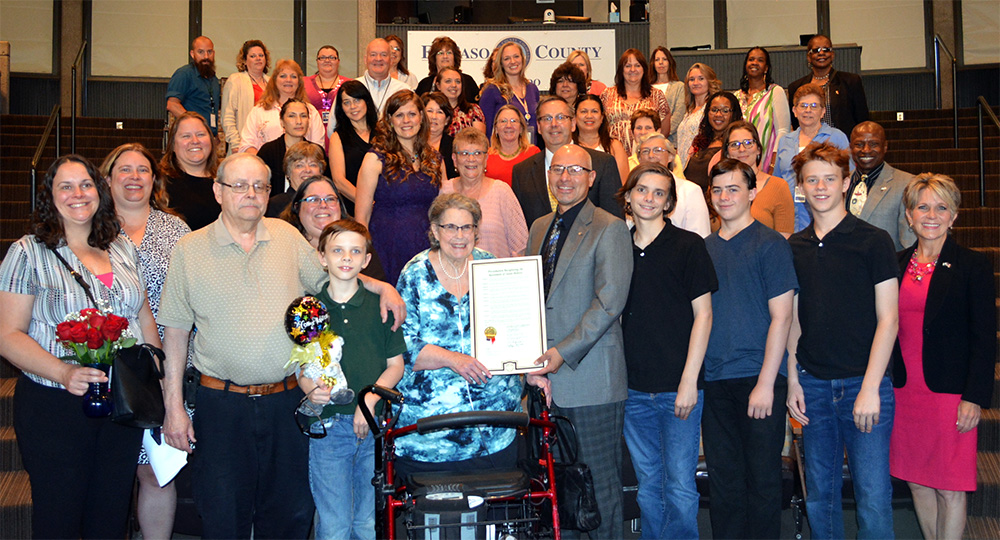