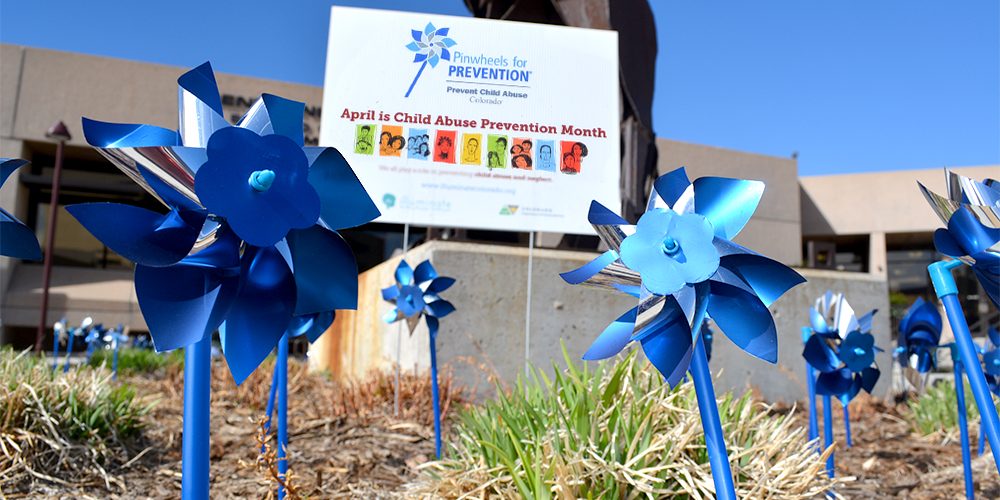 The Board of El Paso County Commissioners at its regular meeting Thursday recognized April as National Child Abuse Prevention Month with a Proclamation. After the Proclamation, more than 100 pinwheels were planted in front of Centennial Hall to highlight efforts to prevent child abuse and neglect.

“Child abuse and neglect is a nationwide problem that is preventable when parents, families, communities and government work together to advocate for caring and safe environments for all children,” said Commissioner Stan VanderWerf as he read the Proclamation into the record. “Effective child abuse prevention efforts, such as the Not One More Child Coalition, succeed because of the partnerships created among human service agencies, public health, the District Attorney’s Office, schools, faith and civic organizations, the medical community, law enforcement and first responder agencies, the business community and concerned citizens.”

Commissioners shared their gratitude for the efforts to prevent child abuse and neglect. “This is something that is very important for the community,” said Commissioner Longinos Gonzalez Jr. “I’m so appreciative of all the hard work that you do.”

The El Paso County Department of Human Services (DHS) received nearly 16,000 reports of child abuse and neglect in 2017. Of the abuse and neglect calls reported, 6,395 were assigned to case workers for assessment.

“Child safety is a cornerstone for a healthy community, and it is something that El Paso County embraces,” said Jill Calvert, Director of Children, Youth, and Family Services in the Department of Human Services. “I want to thank DHS staff for helping to ensure child safety every day, and our community partners who play a critical role in supporting families.”

After the Proclamation, Commissioners, County staff and community members planted more than 225 pinwheels in front of Centennial Hall. The pinwheel “garden” is a tradition during the month of April. Prevent Child Abuse America introduced the pinwheel in 2008 as the national symbol for child abuse prevention through Pinwheels for Prevention. The pinwheels serve as reminders of the great childhoods desired for all children.

“You have to love this work to do this work,” said Chris Garvin, Deputy Executive Director of the Department of Human Services. “Your support really helps us.”

There are several special events planned as part of Child Abuse Prevention Month, including:
• There will be a film and discussion panel about child trafficking from 6 to 8 p.m. April 18 at Centennial Hall Auditorium, 200 S. Cascade Ave.
• The Exchange Club of Falcon is hosting a Child Abuse Prevention Information Fair from 10 a.m. to 2 p.m. April 27 in room 1017 at the El Paso County Citizens Service Center. Different organizations will be sharing information and there will be free safety items distributed.

April is also National County Government Month, highlighting the critical role Counties play in keeping communities healthy, vibrant, and safe, especially through the protection of children, its most vulnerable citizens.

Volunteers Needed for El Paso County Board of Health
February 26, 2021