VIDEO: The newly constructed 1-25/Fillmore Bridge interchange was renamed in honor of Donald G. Stratton on June 8, 2018. Stratton is a Pearl Harbor survivor from the USS Arizona. 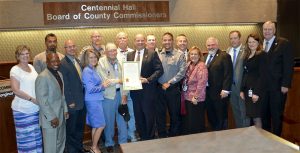 Donald Stratton at the Board of County Commissioner’s meeting in June 2017.

Stratton, whose 95th birthday is next month, was a 19-year-old Seaman First Class on the U.S.S. Arizona December 7, 1941, when the Japanese attacked the U.S. Pacific Fleet. The Arizona took a direct hit with a bomb detonating in an ammunition storage area directly below Stratton’s battle station. With burns over two-thirds of his body, Stratton managed to pull himself through the raging flames to safety aboard the nearby U.S.S. Vestal which had been tied to the Arizona in the harbor.

Commissioner Stan VanderWerf read the Proclamation into the record noting, “Stratton was one of only 334 from the Arizona’s crew of 1511 who survived the attack.” VanderWerf added, “He is a testament to the Greatest Generation, a humble man who has been living his life quietly and it is such an honor that we are able to recognize him in this way.”

El Paso County Sheriff’s Lt. J.D. Ross commented that the Sherriff’s Office escort team has had the opportunity to provide escort for many officials and dignitaries, but “we have never been more honored to provide this service, we are truly inspired by what you have done and thank you for the privilege.”

Randy Stratton told Commissioners that he and his Dad are planning to go to Washington next month to continue their efforts to secure a posthumous medal for Joe George, a sailor on the Vestal who is credited with saving the lives of six men aboard the Arizona. Joe George threw a rope from the Vestal to the Arizona giving Stratton and five others way to escape the inferno. The Navy noted the lifesaving action of Joe George in his service record but he was never given any a medal or commendation because he had ignored the order of a Vestal commander to cut the tie line to the Arizona so the Vestal could move away from the burning hulk of the Arizona.

Each of the Commissioners added their profound thanks to Mr. Stratton for his service. Commissioner Mark Waller commented, “I’m incredibly thankful that we get to do these types of presentation and especially to be able to honor those from the Greatest Generation.” Board President Darryl Glenn concluded, “It is an absolute honor to be in your presence here today.”

Randy Stratton told Commissioners that he and his Dad are working to secure a piece of the Arizona to be on permanent display in El Paso County’s Centennial Hall.

The website: www.arizonafinalsalute.com has more information on Stratton’s efforts to secure the posthumous awarding of a Navy Cross to honor Joe George for his actions in saving the lives of Stratton and five others sailors. George passed away in 1996.

Donald Stratton’s book, All the Gallant Men: An American Sailor’s Firsthand Account of Pearl Harbor, is available at the Penrose Public Library, as well as through Amazon, Walmart, Target, Barnes and Noble and most other online outlets. Efforts are underway to produce a film based on the book.

Filmore Bridge to be Named for Pearl Harbor Survivor