EPA Brought in to Help with Carson Midway Fire 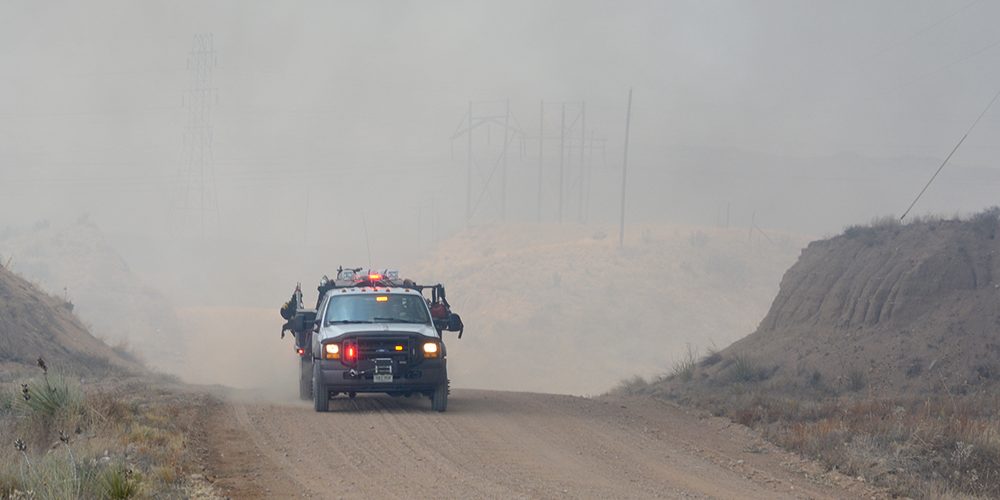 The Board of El Paso County Commissioners got an update on the Carson Midway Fire on Tuesday, and with it came some good news.
El Paso County Public Works Executive Director Jim Reid and Deputy Public Health Director Tom Gonzales and Hanover Fire Chief Carl Tatum addressed the Board during its regularly scheduled meeting Tuesday morning.
Despite 100 percent containment of the 3,300-acre grass fire, Executive Director Reid explained that a remaining fire along a property fence line built using waste tires, large rocks and dirt prompted the County Office of Emergency Management to call in experts from the Environmental Protection Agency (EPA) on Monday night to ensure that efforts to extinguish the burning tires are successful with minimum impacts to air and water quality.
EPA staffers joined Public Health, Firefighters and Emergency Management personnel Tuesday to assess potential ongoing health and environmental impacts from the tire fire including air quality concerns related to the smoking tires and ever-changing weather conditions. Several thousand baled tires that make up a more than 300-yard wall around one of the properties in the area near the intersection of Prairie Fire Point and Deputy Point in the Midway west of I-25 were still burning Tuesday afternoon. Each tire typically contains the equivalent of three to four quarts of motor oil, making these types of fires very difficult to extinguish.
“We want to make sure we have a safe cleanup,” said Tom Gonzales. “When you’re working with ash and debris, there are chemicals, hydro-carbons, heavy metals in that debris. We want to make sure we take all precautions.”
A radius of a quarter-mile around the tire fire has been under mandatory evacuation since the tires ignited. That evacuation is still in place and affects just three homes, which were not part of Saturday’s re-entry.
At 4 p.m. on Tuesday, County officials were still advising all residents within an approximately one-half mile radius of the tire fire to consider leaving the area if they begin to experience health impacts such as nose or throat irritation or if they have underlying cardiovascular conditions that may be aggravated by smoke.
The El Paso County Hazmat team has been in command of the hazardous materials aspect of the tire fire since its inception. Crews from Hanover Fire, Fort Carson, the City of Colorado Springs and multiple other fire agencies around the region have provided mutual aid throughout this event.
Reid said, “That’s the great thing about El Paso County. If someone calls for help, it comes. And it comes in droves. People come together to take care of our region.”
Hanover Fire Department assumed initial command of the fire, handing that command over to Fort Carson Friday night. Fort Carson, which was able to bring in more personnel and helicopters to help with fire suppression, gave that command back to Hanover on Saturday before resident re-entry began. The Hanover Chief noted that fire area is mostly rural and that many ravines and low lying areas have been used improperly as places to dump trash for years and all the added trash in the area made firefighting even more dangerous and difficult.
Initially it was believed that three homes were lost in the fire. That number was updated to two homes after Damage Assessment teams from the El Paso County Assessor’s Office and Pikes Peak Regional Building combed the area on Saturday. Four other homes and several outbuildings were also damaged.
Categories: Commissioners, Fire, Public WorksMarch 21, 2018