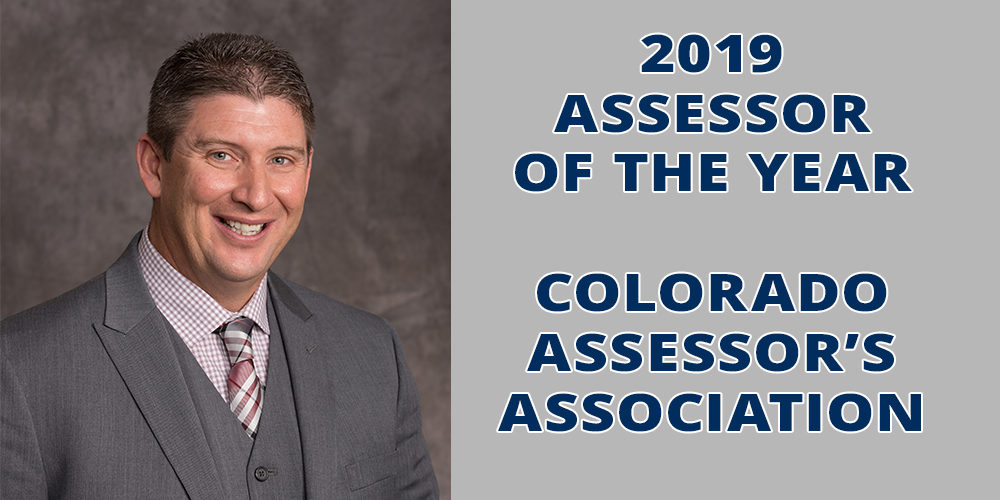 El Paso County Assessor Steve Schleiker was named the 2019 Assessor of the Year by the Colorado Assessor’s Association at its 77th Annual Winter Conference held at the Antler’s Hotel in Colorado Springs on Wednesday, Dec. 4.

Steve said, “I am absolutely humbled and honored by this award. It goes to show how great of a staff work in the Assessor’s Office. Yes, my name is on the website and the door; however, it is the staff that answer the phones, greet our customers, and measures new homes. I am extremely blessed.”

Steve has served in the El Paso County Assessor’s Office since 1999, and is a current licensed appraiser in the State of Colorado. He has served as a Personal Property Appraiser, Personal Property Manager, Office Operations Manager, Deputy Assessor and finally the title he currently holds, Assessor of El Paso County. He has been a strong voice for fiscal responsibility and has led major initiatives that have helped El Paso County usher in new technologies that have provided greater efficiencies in the appraisal processes, such as “mobile office” programs for the field appraisers, and changing to a more detailed and accurate method of re-appraising property. These efficiencies have allowed the El Paso County Assessor’s Office to reduce staffing levels by over 20%.

After graduating from Widefield High School in 1987, Steve joined the United States Marine Corps where he received numerous awards and was a decorated veteran from Operations Desert Storm, Southern Watch, and Deny Flight. In 1993, Schleiker was named first runner-up for the John W. Finn Aviation Ordnance Man of the Year award for the United States Navy and Marine Corps.

After an Honorable Discharge in 1999, Steve went on to earn his Appraisal License. He holds a Bachelor of Science Degree in Information Technology Management, a Master’s Degree in Project Management, and an Executive Master’s in Business Administration.

Steve and his family are active in the community and enjoy living on the west side of Colorado Springs, where they are members of Woodmen Valley Chapel and serve on several local boards.

Since 2014, Steve and his staff have worked diligently to make the El Paso County Assessor’s Office a model of efficiency, effectiveness, and customer service. Steve continually builds positive relationships with property owners and taxpayers. He strives to expel the notion government offices are adversarial and works daily towards transparency. Steve is committed to serving El Paso County and under his guidance continues to make the Assessor’s Office not just competent, but outstanding.

Winter Waterfall Viewing at Rainbow Falls by Appointment Only
January 14, 2021