Juneteenth traces roots to June 19, 1865. President Abraham Lincoln’s Emancipation Proclamation of 1863 was supposed to end slavery throughout the United States. But both Civil War battles and slavery continued for another two and half years and after the official end of the Civil War with the Confederacy surrendering to the Union on April 9, 1865 slavery continued in many areas of the country.

The Board of County Commissioners, during its regularly scheduled Thursday meeting, gave unanimous approval to a Proclamation declaring the week of June 17-23 as “Juneteenth Week” in El Paso County.

Commissioner Stan VanderWerf read the El Paso County Proclamation into the record noting, “Juneteenth commemorates the June 19, 1865 landing of Union Solders at Galveston, Texas on a mission to end slavery and force compliance with the Emancipation Proclamation.” The Proclamation further states, “Juneteenth has been a positive force in our nation and in El Paso County since its foundation in 1865. It is important that we continue to work on long-standing relationships in the Pikes Peak Region to foster cultural respect and inclusion among all community leaders and citizens.”

Local chapter President Henry Allen Jr., of the Southern Christian Leadership Conference (SCLC) thanked the Commissioners for the Proclamation and their ongoing support. “This community has the resources, the heart and the potential to show the rest of the world what can be done by being colorblind,” Allen said. “Think about the future of this community when it is all inclusive.” Allen reminded everyone that Colorado Springs founder General William Jackson Palmer had been a soldier, fighting against slavery in the Union Army, “because he was appalled by what was happening (to black people).”

Nicholas Crutcher of the Juneteenth celebration told Commissioners the celebration helps to highlight the needs of youth. “We want to assure that all of our children are reading on level and they understand that gangs are not the answer,” Crutcher said. 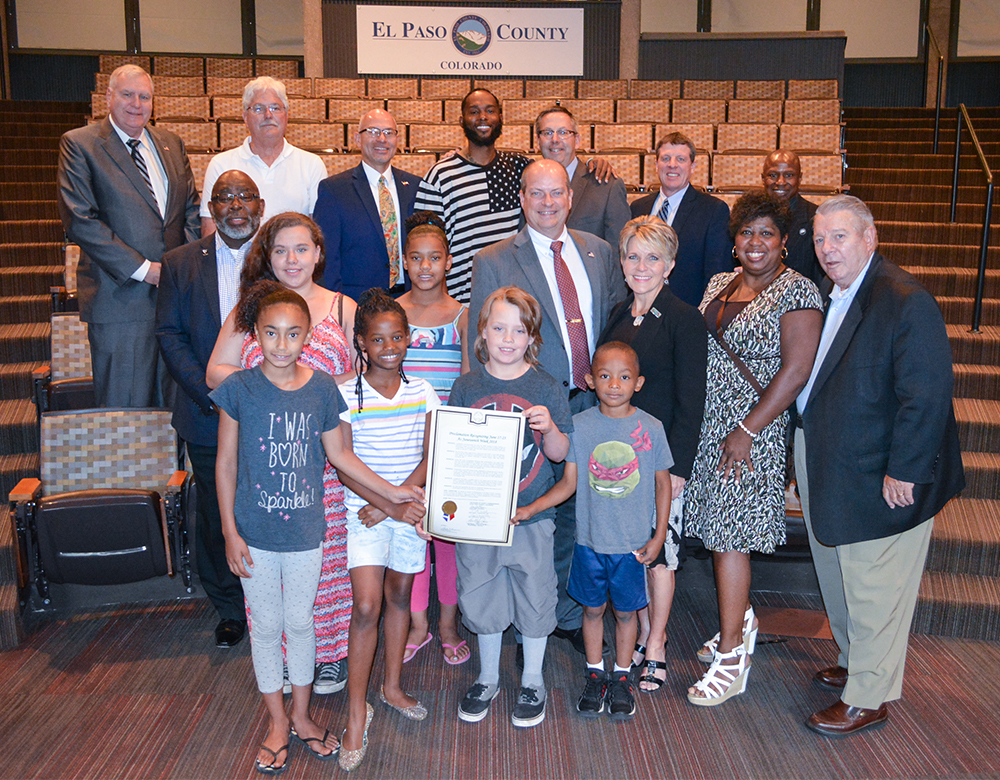