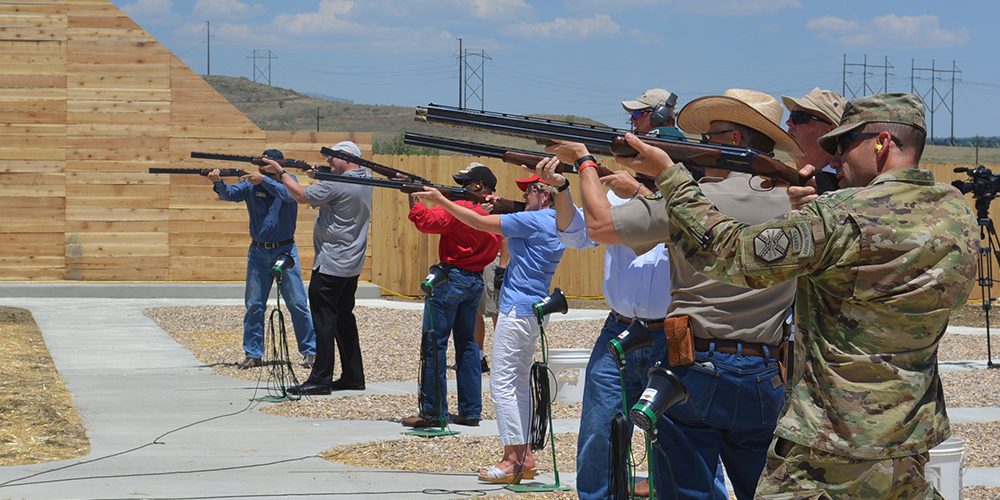 Trap and skeet shooting enthusiasts can now sharpen their skills on a brand-new range at the Cheyenne Mountain Shooting Complex (CMSC). County Commissioners joined with leaders from Fort Carson, Colorado Parks and Wildlife and the El Paso County Sheriff’s Office in brief ceremonies at noon today before the latest addition to the Complex was officially opened to the public.

In remarks at the ceremony, Board of County Commissioners President Darryl Glenn said, “The development of the trap and skeet facility is another example of the collaborative spirit between Fort Carson and El Paso County. This addition will allow even more Fort Carson troops and El Paso County residents to enjoy this facility.” Commissioner Glenn thanked Fort Carson Garrison Commander Colonel Ronald Fitch and recognized Colorado Parks and Wildlife Southeast Region Wildlife Manager Dan Prenzlow for their ongoing collaboration and support.

Completion of the trap and skeet range project was made possible by a $110-thousand-dollar grant from Colorado Parks and Wildlife, $259-thousand dollars from Colorado Lottery (Conservation Trust) funds, the donation of labor and materials by St. Aubyn Homes and other private contributions totalling approximately $68-thousaand. Site preparation and grading valued at approximately $300-thousand was incorporated in training exercises by the 615-th Engineer Company at Fort Carson.

Cheyenne Mountain Shooting Complex is located on 400 acres of Fort Carson property. The Grand Opening in January 2013 was the culmination of three-years of work to develop a groundbreaking agreement that would allow for the construction and operation of the largest public shooting range in Colorado on Fort Carson property but with open public access that would not require shooters to go through the Fort Carson Gates.

More information about the Cheyenne Mountain Shooting Complex can be found on the El Paso County website at: https://www.elpasoco.com/cheyenne-mountain-shooting-complex/