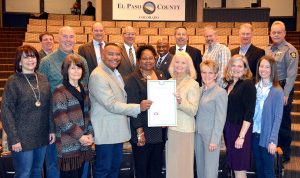 The Board of El Paso County Commissioners recognized Thursday, May 3, 2018, as the National Day of Prayer with a Proclamation supporting an American tradition that dates back to 1775.

Commissioner Peggy Littleton read the Proclamation into record, echoing words from a Resolution of Congress read by President Harry Truman in 1952. That Congressional Resolution further defined a National Day of Prayer directing that the President, “shall set aside and proclaim a suitable day each year, other than a Sunday, as a National Day of Prayer, on which the people of the United States may turn to God in prayer and meditation at churches, in groups and as individuals.”

President Ronald Reagan further defined the commemoration by designating the first Thursday in May each year as the National Day of Prayer.

“I am grateful that we do a prayer every time we have a Board meeting.” Commissioner Stan VanderWerf said. “Our prayers for the community and for this Board give me strength to make decisions on the dais. I would like to thank God for what he does to help us make those decisions so we can have a better community.”

Rex Tonkins, Colorado state coordinator for the National Day of Prayer Task Force received the El Paso County Proclamation. “I want to thank the Commissioners for acknowledging God today,” Tonkins said. “He directs us. He gives us the ability to lead.”

The 2018 National Day of Prayer theme is “Pray for America – Unity” and on Thursday, May 3, 2018, individuals across the state and nation will come together in prayer.