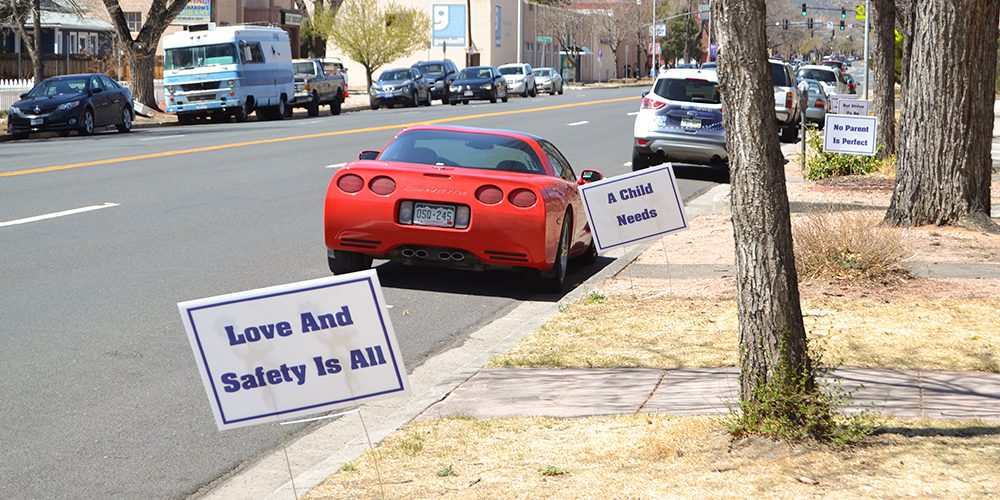 The temporary signs will be installed in public rights-of-way in more than nine different locations around El Paso County. The signs will be on display for the month of April, which is Child Abuse Prevention Month. Each series shares a message aimed at family safety and preventing child abuse and neglect.

The campaign was modeled after the Burma-Shaves signs. The U.S. company was famous for its gimmick of posting rhyming poems on small highway road signs that spelled out a message. The signs were used heavily along such highways as Route 66 until the expansion of the Interstate system in the 1950s.

“We wanted to find a way to share the message of keeping families safe during Child Abuse Prevention month,” said Julie Krow, Department of Human Services Executive Director. “The long-term effects of child abuse and neglect are felt by our whole community, and need to be addressed by the entire community.”

The idea for the signs originated with County Administrator Henry Yankowski and Project Analyst Whitley Crow. The messages on the signs were created by staff in the El Paso County Department of Human Services and Public Health. Although child abuse and neglect is a serious subject, keeping a family safe is something that can be addressed in multiple ways.

“The approach borrows from the past to provide modern reminders for families in our region,” Yankowski said.

“Staff with the Department of Human Services work hard every day to help families in crisis,” said Board President Darry Glenn. “These signs are an innovative way to help build safe and happy families.”

Another visible reminder for Child Abuse Prevention Month are the pinwheel “gardens” that have been planted in front of El Paso County’s Centennial Hall and the Citizens Service Center. Prevent Child Abuse America introduced the pinwheel in 2008 as the national symbol for child abuse prevention through Pinwheels for Prevention. The pinwheels serve as the reminder of the great childhoods we want for all children.

There are several special events planned as part of Child Abuse Prevention Month, including:

· There will be a film and discussion panel about child trafficking from 6 to 8 p.m. April 18 at Centennial Hall Auditorium, 200 S. Cascade Ave.

· The Exchange Club of Falcon is hosting a Child Abuse Prevention Information Fair from 10 a.m. to 2 p.m. April 27 in room 1017 at the El Paso County Citizens Service Center. Different organizations will be sharing information and there will be free safety items distributed.