El Paso County Public Works crews are completing damage assessment and beginning repairs in the aftermath of the severe thunderstorm that swept through the area Monday afternoon and continued, particularly in the southern part of the County, into the early morning hours Tuesday. 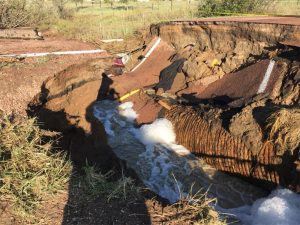 Storm damage led to injuries to three people early this morning when flooding washed out a 48-inch culvert across Old Pueblo Road at Birdsall Road in the southern part of El Paso County. With the culvert gone the flood waters opened up deep and wide ditch across the roadway. Two vehicles subsequently drove into the ditch followed by a Hanover Fire Truck responding the reported vehicle crash. The driver of one of vehicles and both firefighters onboard the pumper truck were injured and taken to local hospitals. Old Pueblo Road will be closed to all traffic as crews clean out the debris and work to replace and upgrade the drainage structure.

Facilities crews responded early this morning remove water and debris in the secure underground vehicle entrance that serves the Metro Jail and Judicial Building Complex downtown. There was no permanent damage noted in the area and Sheriff’s transport vehicles were able to operate normally bringing detainees into the building for court appearances. Other buildings in the downtown County campus experienced some ceiling and window damage but relatively minor.