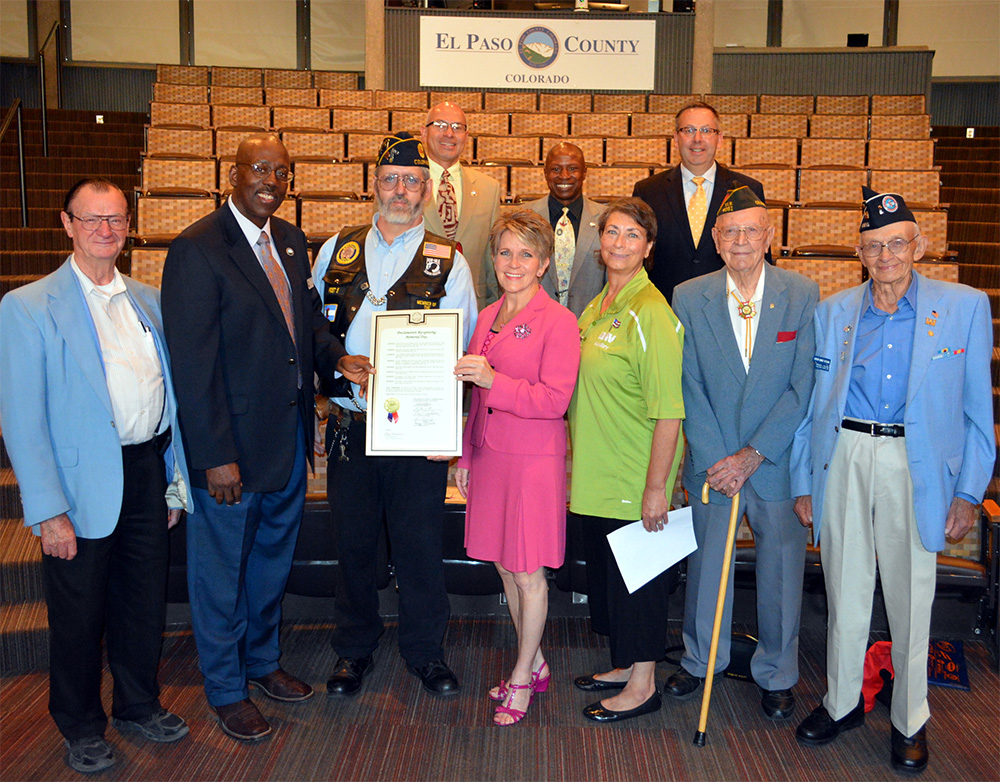 The Board of El Paso County Commissioners paid tribute at its regular meeting Thursday, May 24 to all American and Canadian veterans who have died fighting for our freedoms. Commissioner Peggy Littleton read a proclamation into the record recognizing Memorial Day, which falls on Monday, May 28, 2018.

The proclamation honors those “who served bravely and faithfully on battlefields throughout the world.” It goes on to encourage all El Paso County residents “to support all veterans on this special day, and every day.” More than 98,000 veterans and their dependents call the Pikes Peak region home.

“Monday is a day for us to remember those who have made the ultimate sacrifice, giving their own lives in service to their country,” said Commissioner Longinos Gonzalez, a retired Air Force officer.

Memorial Day was originally known as “Decoration Day” and May 30, 1868 was set as a day when Americans were urged to decorate the graves of those who died in the Civil War. Decoration Day was expanded after World War I to honor all those who served in all American wars. An act of Congress in 1971 officially renamed the day “Memorial Day” and declared a federal holiday to be observed on the last Monday of May each year.

Carl McDaniel with El Paso County Veterans Services thanked the Commissioners for honoring all veterans “for several years” with the annual Proclamation. “This just shows the solid support, year after year that you all have provided to the veterans of this community, to the active duty military and to all the citizens of El Paso County,” McDaniel said.

Representatives from multiple veterans’ organizations were on hand Thursday for the reading.

Board of County Commissioners President Darryl Glenn, who is also a retired Air Force officer, told the veterans in attendance, “It’s truly an honor. This is a very special day each year that we recognize how much the military really means to us. I want to thank you. You are our heroes.”

The Citizens of El Paso County are encouraged to participate in Memorial Day ceremonies that will be happening at various locations across the County.